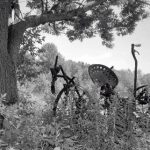 Bill’s pride and joy was his home at Dyberry Farms in Oregon Township. He and his wife owned and operated the farm and he was extremely proud that his son, Bill Jr., would be the fifth generation of the family to manage it. He enjoyed working and spending time there. A man who enjoyed to keep busy, Bill also owned and operated an excavating business.

In his spare time, Bill enjoyed hunting and fishing and was a member of Lone Pine Hunting Club. He also enjoyed spending his Sundays at Dyberry Sporting Clays with his friends.

In addition to his wife, Bill is survived by his son William Ridd Jr. of Honesdale; his sisters Tammy Hollister of Honesdale and Joanne Tegeler of Southbury, CT; many other extended family.

He was preceded in death by his son Brian Ridd.

Following cremation, services will be private at the convenience of his family. Arrangements by Hessling Funeral Home, Inc., 428 Main St. Honesdale.

Memorial contributions can be made to Hospice of the Sacred Heart, 100 William St. Dunmore, PA 18512.