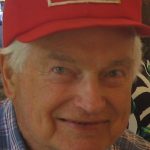 Tony Carson, 94, of Waymart, Pennsylvania, passed from this life into eternal life on August 13, 2021.

He was born to parents, (the late) Bennie and Victoria Przbylkowski, on June 7, 1927, in South Canaan, Pennsylvania. Tony was educated in the Frisbie one-room schoolhouse, the South Canaan school house, and then attended the Waymart High School, graduating in 1945.

Tony provided for his family over the years beginning with sewing shoes at the Hussco Shoe Factory,  followed by completing paving projects with the (Joe)Cavage Construction Company, next as a dispatcher for the Weidner Concrete Company, and finally employed by Carbondale Concrete Company until he retired in 1992.

Tony was known for his friendliness and sense of community.  When his father-in-law, John S. Gallik, was ill with ALS, he took over John’s position as supervisor of Canaan Township. Tony also served as secretary/treasurer of Canaan Township, overseeing the widening of most of the muddy one-lane township roads in the area.  He then served as a school board director for the Western Wayne Consolidated Schools during the planning of the Western Wayne High School.  Whenever opportunity allowed, Tony enjoyed ice fishing, hunting, and gardening.

Funeral services will be private and at the convenience of the family.   Arrangements made through the Hessling Funeral Home, Honesdale, PA.

There will be no public calling hours.