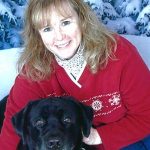 Tina (Smith) Augello, 58, of Beach Lake, PA passed away suddenly at home on Sunday evening August 16.  Born in Honesdale, she was the daughter of the late James and Edwina Mae Jordan Smith of White Mills, PA.  She graduated from Wallenpaupack Area High School in 1980.

Tina’s truest love was her family.  She is survived by her husband of 15 years, Mark Augello.  She is also survived by her sister and best friend, Kim Hodder with husband Marc, Beach Lake and her brother Jamie, Lebanon Township.  Tina was a guiding light and a huge presence in the lives of her niece Shea and nephew Jacob Hodder, who adored her immensely.  Tina also leaves behind mother-in-law, Karen (Chuck) Detori, father-in-law Charles (Sylvia) Augello, brother-in-law Chas (Marci) Augello, sister-in-law Susan (William) Zylstra of Salisbury, MD and nephew Luke and niece Riley Zylstra.

Tina was a loving, selfless soul who was kind beyond measure and had a tremendous impact on the lives of countless people.  One of those people would eventually become her husband.  From their first meeting, Mark felt a strong connection and was sure they should go on a date.  For Tina, this took some time and convincing.  Once she finally agreed, they became an inseparable couple and complemented each other perfectly.  They enjoyed many common interests including spending time outdoors and taking rides in their side-by-side with their dog Mica.  Known as “Aunt Tina” to many, she gave freely of her time organizing events and lending her talents to her wide group of friends and their children.  She loved spending time with her family and took great pride especially in Shea and Jacob throughout the years.

Tina’s passion for baking and photography were well known by many.  She enjoyed baking creative cakes, that were truly works-of-art, for any special occasion.  Her talents kept her busy tending to requests of family and friends.  Tina was rarely without a camera to capture life’s special moments and was a master at creating memories for others to enjoy.  She was a devoted member of St. John the Evangelist RC Church and grew up attending St. Joseph’s in White Mills.

Professionally, Tina began her career in healthcare at the age of 18.  Her first job was working for Rea & Derrick Drug Store on Main Street in Honesdale.  In 1992 she took a leap of faith and became one of three founding employees of what is now Stephens Pharmacy and Northeast Med-Equip.  Her passion for helping people was unequaled and through her 28 years there she earned certifications in several specialties including pharmacy technician, mastectomy fitting and orthotics.  She was widely known as an expert in the home medical equipment field.  One of Tina’s many gifts was her compassion for others and the way that she cared for each person in their time of need.  Throughout her career her work ethic and commitment to customers and her co-worker family was unmatched.  At the time of her passing she was General Manager and oversaw all aspects of the medical equipment and retail store operations.  Tina lead by example and was a mentor and positive role model to many.  She was and forever will be, a beloved member of the Stephens family.

Tina cared for others in such a loving way that her passing will leave an indelible mark on her family, friends and co-workers.  Her infectious laugh, her thoughtful deeds and her calming nature will live on in the hearts and minds of her loved ones.  Due to the current health restrictions, Tina will be laid to rest on Tuesday following a private Mass of Christian Burial at St. Mary Magdalen RC Church.  A celebration of her life is planned for some time in the future.   In lieu of flowers, contributions in Tina’s memory may be made to the Dessin Animal Shelter or St. John the Evangelist RC Church.  Arrangements by Hessling Funeral Home, Inc., 428 Main St. Honesdale.