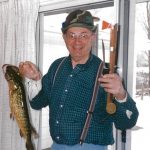 Thomas J. Tolerico, 94, formerly of Honesdale, died on Thursday, February 4, 2021 at the Gino Merli Veterans Center in Scranton where he was residing.  He is survived by his wife of 60 years, the former Winifred Case.  The couple married on January 7, 1961.

Born on April 15, 1926 in Honesdale, he was the son of the late Joseph James and Mildred C. Van Sternberg Tolerico. He was raised on Terrace Street by his Aunt Stella Dunn and his maternal grandparents.  He was a US Navy veteran serving during World War II in the Pacific Theatre.  He was most proud of his service on the aircraft carrier, USS Hornet where he was a plane captain on the flight deck.  He was honorably discharged at the age of 18.

Following his service in the Navy, he attended aviation mechanics school in Long Island.  For 38 years, he worked for PP&L starting his career as a lineman and then became a foreman.

Tom was the oldest living life member of Texas #4 Fire Company.  He was an avid fisherman and he enjoyed teaching the skill to others.  He especially enjoyed fishing on Lake Ontario and Lake Cayuga.  After attending Sunday mass at St. Mary Magdalens, Tom enjoyed trips to the flea markets in Scranton.

Also surviving is his son Joseph Tolerico and wife Lori of Honesdale; his grandsons Stephen and Patrick Tolerico; brothers-in-law Charles Case and partner Jean of Honesdale and Robert Case and wife Nancy of Florida; a nephew John Signorelli and wife Marsha; a niece Joan Marie Hogeboom.

As per Tom’s request, a graveside service will be held in the spring in St. Mary’s Cemetery, Honesdale.  Arrangements by Hessling Funeral Home, Inc., 428 Main St. Honesdale.

Memorial contributions can be made to St. Jude’s Children’s Hospital.