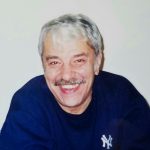 Stephen H. Doney, 70, of Honesdale, passed away peacefully on August 31, 2018 in Rockville, MD after a courageous battle with cancer.
Born on May 7, 1948 in Honesdale, he was the son of the late Henry and Dorothy Stocker Doney. He was a graduate of Honesdale High School. Later he served in the US Army during the Vietnam War. He was stationed in Germany with the 84th Engineering Company.
A lifelong resident of Honesdale, he worked for over forty years in local businesses and retired from Dave’s Super Duper in September of 2016. Known for his infectious laugh, he cheered passionately for the New York Yankees and New York (football) Giants. A sports fan, Steve was an umpire in the Wayne County Softball League. He also possessed an encyclopedic memory of Western movies and television shows, particularly John Wayne.
In his retirement, he continued to be an avid reader, and was a familiar figure walking the streets of Honesdale.
Surviving is his sister Mary Ann McNamara and husband William of Rockville, MD; his nephews Chad Jones and wife Kelly, Rudy Philback and wife Beverly, Joseph Philback; nieces Kelli McNamara, Rose Hocking and husband David and Ann Sakolsky and husband Lee and numerous great nieces and great nephews.
He was preceded in death by his sister Marie Philback.
As per his request, cremation was held at Chesapeake Crematory. His family will receive friends on Friday, September 21st, 4 to 6 at Hessling Funeral Home, Inc., 428 Main St. Honesdale. Steve Doney, lifelong Yankee fan, safe at home.