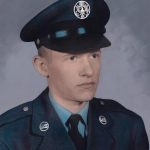 Born on April 26, 1944 in Carbondale, he was the son of the late Wilson Woodrow and Hazel (Conklin) Stanton. He was a proud US Air Force veteran. Rodger worked for the former Amber Lingerie and retired from the Tobyhanna Army Depot.

A bass guitarist, Rodger played in the Carl Kennedy Band and the Mickey Barnett Band. He enjoyed reading, crossword puzzles and loved cars. A patriotic person, Rodger could be seen walking Mains Street early in the morning to be sure all the flags were straightened. He was very proud to take care of his mother when she became ill.

Surviving is his son, James Stanton of Marion, SC; his sister-in-law, Leana Stanton of Equinunk; several nieces and nephews.

He was preceded in death by his brother, Wilson Woodrow Stanton, Jr.; sisters, Pat Masker and Beatrice Dolaway.

As per his request, there will be no public services. Arrangements by Hessling Murray Funeral Home, 428 Main St. Honesdale.