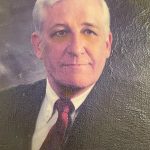 Born on December 21, 1928 in Forest City, he was the son of the late Harry and Mary (Shuma) Romich. He and his family moved to the Honesdale area in 1939 and graduated from Honesdale High School, class of 1947. He served for four years in the US Air Force during the Korean War and left to help the family operate their business, Romich’s Hotel and Recreation Center. After various other business ventures, he finally retired from real estate with Coldwell Banker Commonwealth at Lake Wallenpaupack at the age of 84.

Bob was a member of Bucks Cove Rod and Gun Club. A Fourth Degree Member of the Knights of Columbus, he also served as Faithful Navigator. He was a faithful member of St. John the Evangelist Parish in Honesdale, attending St. Mary Magdalen Church and Queen of Peace Church in Hawley.

He was preceded in death by his sons Jayme, Thomas, and an infant son John; two sisters Betty Baumann and Arlene Lescinski and a brother Harry Romich.

A Funeral Mass will be celebrated on Friday, February 5th at St. Mary Magdalen Church in Honesdale at 10 am. All attending are required to wear a mask. Interment with military honors will follow in St. Mary’s Cemetery. Arrangements by Hessling Funeral Home, Inc., 428 Main St. Honesdale.