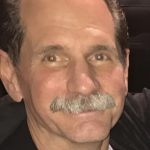 Born on March 23, 1948 in Carbondale, he was the son of the late Roland and Charlotte (Crockenberg) Rosler.  Pat was a proud US Navy veteran, serving on the USS Chivo and USS Pickerel.  He went on to be an active reservist in Avoca, achieving the rank of Chief Quartermaster and serving as a career counselor.

For many years, Pat was a manager for the Pennsylvania State Store in Honesdale and surrounding areas. He performed mathematical computations on a numeric keypad faster than most people blink and was a walking encyclopedia of libation knowledge (even though he rarely drank) and, despite state policy, his favorite co-worker was his son over college winter breaks.  He became informally known as the “Mayor of Honesdale”, as he always knew someone wherever they were and, typically, had a rib or joke for them.

After retiring, he went on to serve as a Park Ranger and Tour Guide in the Gifford Pinchot Manor and Historical Site.  He was a member of St. John the Evangelist Parish in Honesdale and a devoted, hard-working volunteer caretaker of Glen Dyberry Cemetery for many years.  Much like the Liquor Store and Pinchot Manor, he was sage-like in his knowledge of local families and the history of Dyberry itself.  He enjoyed playing guitar, singing, and collecting coins and stamps via eBay, complete with tales of victory winning that “one stamp he needed”.  Pat also enjoyed rooting for the Pittsburgh Steelers…painful as it typically was to do so.

He loved fishing with his grandsons and watching them grow up, hearing about everything  – From Math grades, to Rubik’s cubes, to Scouts, and beyond.  The boys knew they could always expect an Old McDonald sing-along, a Klondike bar, and maybe…if they were good…a couple of cookies from the cookie jar.  One of their favorite pastimes, though, was the art of Poker, as originally taught to his son.  To this date, we’re still not sure who the winner ever was, but we think he let us win more than he let on.  He also loved and had immense pride in his son and daughter-in-law, often preferring to talk to her first.  Pat never hesitated to let his son know just how proud he was of him and everything he accomplished – From first steps to his family.  Above all, he was a devoted husband and, in recent years, a gentle caretaker to his wife and best friend.

He was preceded in death by his brother, Jim Rosler.

A Mass of Christian Burial will be celebrated on Tuesday, May 17th at St. John the Evangelist Parish in Honesdale at noon. Interment with military honors will follow in Glen Dyberry Cemetery, Honesdale.  Friends may visit Hessling Murray Funeral Home, 428 Main St. Honesdale on Tuesday, 9 to 11:30.