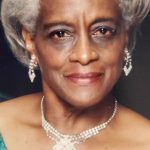 Miriam Audrey Haynes-Nair
Making her grand entrance to the world, in Brooklyn, NY on October 31, 1925 Miriam Audrey
Haynes was the fourth child of the late Alphonso W. and Ethel Steptoe-Haynes. As the sun rises
it sets and on November 20th, 2021 Miriam was called to join her beloved Husband, Parents,
Sisters, and extended Family for the largest party the Heavens had seen.
Miriam enjoyed and thrived in New York City’s public schools attending Public School 64,
Berriman Junior High School, Franklin K. Lane High School,and Malcolm-King College. Those
educational endeavors lead to Miriam earning her Baccalaureate Degree in Liberal Arts from
Iona College. For Several years she worked in the New York City Health Department in a
multitude of Health Centers and Unity Hospital as well as public health offices. As public service
was her passion she ended her illustrious career in the Finance Department where she
managed Real Estate matters.
In 1957, after a wooing courtship she married the late Rama Krishna Nair. In 1959, at the age of
35 her first born son Paul entered the world. Shortly after in 1965 at age 41 her second born son
Andrew made his debut. The pair settled down in their beloved Brooklyn at 607 Belmont Avenue
where they would revel in fourty (40) years of wedded bliss.
Always faithful to her religion and community she sang in the choir at St. Barnabas Church and
participated in many of their activities for children and adults. She was an active member of St.
Michael’s Church where she later joined the Christian Mothers organization and eventually
celebrated her “Diamond” membership in the late nineties (90’s). Having a plethora of artistic
talents such as sewing, crocheting, painting and woodworking Miriam was ever eager to share
her knowledge as such she tutored, taught and volunteered around the city at events like the
NYC Marathon and All Election overviews. This work continued long into her Eighties (80’s).
Having been with us for 96 years Miriam will be sorely missed, but more so celebrated. Survived
by her son Paul, his wife Josie, their children Aja, Crystal, Justine, Jasmin, Chelsee, and
Bradley. Her son Andrew, his children Andrew II., Delia, Shavon, Sherrod, Jazzmine, Darnella
(Cici) Kaysha, Adasia, Lerone (doodi) and Kaydin. Her great grandchildren Anaya Rose, Aniyah
(Delia’s daughter), Andrew III, Xavier, Jaden, Marquis, Mia, Raely, and Adonis. Her Brother
Alphonso II his wife Margaret. Her Nieces: Judy, Marcia, Roberta, Patricia (Pat), Miriam,
Antonette (Toni), Yolande (yo-yo), Cynthia, Gale (Sandy), Bernadette (Bunny), Teresa (Terry)
and Pilar, Mia, Pia and Alicia. Her Nephews: August, Dawoo, Martin, Dexter, Micheal, Kirk,
Keith, Roland, Alphonso III, and Alejandro. There are many grand niecies, nephews, cousins,
family and friends Miriam leaves to mourn.
We say farewell Miriam Audrey Haynes-Nair you gave us your love, sense of humor, and
endless support. We will miss you, bless you on this final journey. May you be welcomed by the
heavenly choir, Ronnie, and all those who have gone before you. We will continue and revel in
your legacy and honor!
Sunrise: October 31,1925
Sunset: November 20, 202