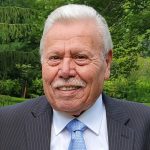 Joseph Scarfalloto passed away on October 25, 2021.

Joe was only 17 yrs of age when he and his older sister Lina, walked on that New York City Pier, in 1958, not knowing what was ahead of them in a new country. He fought the challenges that life presented, overcoming them and truly lived the American dream! He brought his hard work ethics to this small town of Honesdale, PA and called it home.

Joe was a businessman beginning with the opening of a small pizza shop with his brother in law Giovanni Squatrito in Coney Island, NY., eventually moving, with both families, to Wayne County PA where Two Guys From Italy was born in 1972, then later helping his brother Angelo to open a bakery right next door then younger brother Nick joining the family business along with brother in law Benny Valerio. And with that procession became his bonding relationship with his customers at heart from his first customers at Two Guys From Italy through today. An Entrepreneur in every way.

But the most proudest and most important job of all was being a grandfather and admiring his grandkids. Joe was often found playing hide and seek with Ciana and Luca, being Joey’s biggest fan at every basketball game, giving Natalie the biggest, longest hugs, dancing with Aly at her wedding and being so proud of the man “little” Lorenzo had become!

A Mass of Christian Burial will be celebrated on Monday, Nov. 1st at St. Mary Magdalen Church in Honesdale at 10 am. Interment will follow in St. Mary’s Cemetery. Friends may visit Hessling Funeral Home, Inc., 428 Main St. Honesdale on Sunday, 2 to 5.