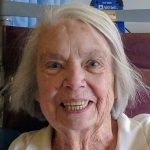 Joan Anita Krodel (nee Kretzmann) passed away peacefully on March 22, 2019
at the age of 86. She was the beloved wife of Reverend Dr. Gerhard Krodel,
former Dean of the Gettysburg Lutheran Seminary, who predeceased her in
2005.

Joan was a talented cook. Her hospitality and table facilitated the
development of lifelong relationships with colleagues and seminarians who
became dear friends.

Joan, Gerhard and their three daughters enjoyed traveling and living
abroad including living for a year in Tuebingen, Germany and later for a
year in Greece as well as traveling in a VW camper during the summers of
1969 and 1970 throughout Europe. Some of these trips focused on pursuing
theological scholarship and mission work for the church and other times
simply to enjoy the beauty and culture of Europe. After the death of her
husband, Joan continued to travel independently.

Joan served on the Lutheran Board for Mission Support and Lutheran
Endowment for Novosaratovka Seminary (LENS) and was named a lifetime
honorary board member of LENS.

Joan was an avid reader, loved a good debate, appreciated a funny joke and
was a devoted wife and mother. She will be greatly missed.

The family wishes to thank her caregivers at Ellen Memorial HCC, the
nurses and staff at Wayne Memorial Hospital and the Hospice Team.

A memorial service was held in the Church of the Abiding Presence at the
Lutheran Seminary in Gettysburg on April 6. In lieu of flowers the family
requests donations to the Lutheran Endowment for Novosaratovka Seminary
Foundation, (LENS) 1201 Garfield Avenue, Albert Lea MN 56007.