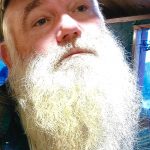 Obituary Viewed 1181 times
Share Print
Jerry Michael Strackbein, 61, of Lake Ariel, died unexpectedly on Monday, August 22, 2022 at Geisinger CMC in Scranton.  He is survived by his wife of 37 years, the former Christa Meszler.  The couple married on September 22, 1984.
Born on March 24, 1961 in Honesdale, he was the son of the late Rexford and Harriet Roberta (Brown) Strackbein.  He had served over 20 years in the Pennsylvania National Guard.  He started his career as a mason.  Recently he drove a log truck and managed the sawmill for Lake Ariel Wood Products.
Jerry was a faithful member of the Hamlin Assembly of God and a member of the Salem Masonic Lodge in Hamlin.
An outdoorsman, he enjoyed fishing and camping with his kids and family.  A handyman, Jerry was a talented blacksmith building black powder guns and knives.  Jerry was a loving husband, father and grandfather.
In addition to his wife, he is survived by his children, Kelly Hadden and husband Thomas of Honesdale and Matthew Strackbein of Honesdale; his brothers, John Strackbein of Honesdale; James Strackbein of Hawley; Charles Strackbein of Scranton: Steven Strackbein of California; his sister, Darlene Richards of Lake Ariel; his half-sister, Merry Varner of Ohio; step-siblings, Jami Miller, Bonnie Bass and Lenard Scofield; grandchildren, Caden, Isabella and Colton; several nieces and nephews.
He was preceded in death by his half-sister, Paula Bland.
Funeral services will be held on Monday, August 29th at Hessling Murray Funeral Home, 428 Main St. Honesdale at 6:30.  Friends may visit on Monday, 4 until the time of service.
Memorial contributions can be made to the American Cancer Society.