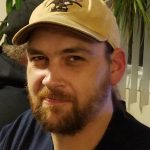 Born on December 28, 1978 in Carbondale, he is the son of James S. Sr. and Dawn (Wilmot) Smith of Honesdale. James grew up in Cherry Ridge helping on the family farm where he enjoyed spending time with his grandparents. He was a graduate of Honesdale High School, class of 1998.

Before moving to South Carolina, James worked at P.A. Hutchinson in Mayfield and Tick Tock’s Restaurant in Honesdale. He enjoyed listening to music, working on cars and spending time with his cats.

In addition to his parents, James is survived by his sister, Jamie Dawn Savage and husband John of Sand Springs, OK; his girlfriend, Mary Zaleta of South Carolina; his nephews, Andrew Weist, Jack and Travis Savage. Also surviving are aunts, uncles, cousins and many friends.

The family will receive friends on Monday, Sept. 26th at Hessling Murray Funeral Home, 428 Main St. Honesdale, 4 to 6. A memorial service will be held at 6 pm.