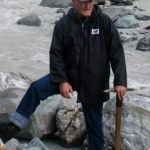 Hugh “Muggsie” K. Murray, 72, of Honesdale, died on Friday, February 1, 2019 at Allied Services Hospice in Scranton. He is survived by his wife of 20 years, the former Deborah Reafler. The couple married on February 6, 1999.

Born on October 16, 1946 in Honesdale, he was the son of the late John and Barbara (Kimball) Murray. Muggsie began working at the family store, Murray Company, before graduating from the University of Scranton with a business degree. He later continued his education at Penn State in engineering. Before his retirement, he was a supervisor for Pennsylvania Department of Transportation in Wayne County for many years.

Muggsie was a man who could do it all. He was an excellent mechanic, taught himself to play guitar and was a great storyteller. A Mensa member, he loved to read and continued to educate himself. He loved animals and he and his wife had several golden retrievers and cats over the years. Muggsie attended Woodstock in 1969 and proudly displayed his tickets framed at his home.

As per his request, cremation will be held and a celebration of his life will be held in the spring. Arrangements by Hessling Funeral Home, Inc., 428 Main St. Honesdale.

Memorial contributions can be made to the Dessin Animal Shelter, 138 Miller Dr. Honesdale, PA 18431.