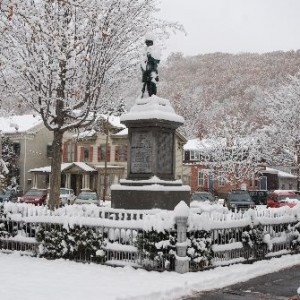 Born on February 14, 1922 in Honesdale, she was the daughter of the late Judson and Alice E. Owen Keen. She was a graduate of Honesdale High School, class of 1940. She later graduated from Penn State University with a bachelors degree in Home Economics.

In her earlier years, Grace enjoyed horseback riding. She traveled extensively with her girlfriends and was an avid golfer and member of Red Maples Golf Club in Waymart. She worked for Sears in Honesdale for many years and after her retirement, Grace enjoyed spending her winters in her home in Bradenton, FL. A very social lady, she was regularly seen around town having lunch with her friends.

She was a member of St. John’s Evangelical Lutheran Church in Honesdale.

Grace is survived by many friends and was preceded in death by her sister Edna Keen in 1987.

Funeral services will be held on Friday, February 5th at St. John’s Evangelical Lutheran Church in Honesdale at 10 am. Interment in Glen Dyberry Cemetery will be in the spring. As per her request, there will be no public visitation. Arrangements by Hessling Funeral Home, Inc., 428 Main St. Honesdale.