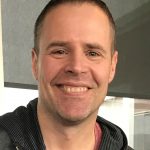 On September 21, 2020, Eric Nolan passed away in Honesdale, PA. Eric was the first of five children born to John Nolan and Jean Nolan (Burkavage). He was born the day before Mother’s Day on May 9, 1975 and his birth brought endless joy to their lives through his unconditional love. He found delight in spoiling his brother and sisters (Michelle Kamnikar and husband Joseph, Colleen Kamnikar and husband Zachary, Luke Nolan and Shannon Nolan) and nieces and nephews (Makenna Kamnikar, Joseph Carl Kamnikar, Rita Kamnikar, William Kamnikar and Catalina Kamnikar) beyond his means. He was godfather to Catalina Kamnikar which brought him great happiness. Being the eldest sibling, Eric served as the protector of his brother and sisters. He was also notorious for torturing his siblings and cousins through teasing and tickling. Eric attended Honesdale High School where he played football and baseball. Upon his graduation, he attended Lackawanna Junior College before transferring to Kutztown University where he graduated with a B.A. in Elementary Education in 2001. While Eric had a passion for all sports, he found the most meaning in his life as a captain and scrumhalf for Kutztown rugby where he created a brotherhood with countless men. Over the years, Eric was one of the biggest supporters of Kutztown rugby both on and off the field. While playing as a scrumhalf, he was known for his athleticism and grit. After his playing career ended, he was inducted in the Kutztown Rugby Hall of Fame. Through his personality, he brought humor into so many lives with his characteristic sarcasm and wit. And his smile and iconic laugh spread joy around many rooms – from the family room at the homestead of his grandparents John and Rita Burkavage in Honesdale, PA to Basin Street Hotel Restaurant and Pub in Kutztown, PA where he was well-known for his bubbly personality and infectious smile serving patrons as a bartender. Eric had a love for animals, especially his dogs Butters, Pudge and Luna. To his friends, he was as fiercely loyal as his pets. In the final seven years of his life, he worked at Top Notch Distributors in Honesdale, PA where he built many friendships with his colleagues and was known for his loyalty and selflessness. He left decades of fond and colorful memories with his siblings, cousins, teammates and co-workers. In honor of his death, a Christian mass will be held with his immediate family. In lieu of flowers, the family asks that friends and family honor Eric’s memory by donating either to Kutztown Rugby or the Make-A-Wish Foundation.
Arrangements by Hessling Funeral Home, Inc., 428 Main St. Honesdale.