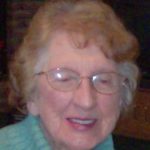 Elizabeth “Betty” Hiller, (90), of North Wales, Pa, formerly of Beach Lake, died peacefully on June 8th. She was preceded in death by her husband, Norman Hiller, on March 25, 1992.
She is survived by daughter Pamela and son-in-law Jeremiah Scullion of Hatfield, Pa., and son David and daughter-in-law Barbara Hiller of Middletown, Md.; grandchildren Matthew and Beth Scullion and Sara, Rebecca, and Brian and wife Maggie Hiller, brother- and sisters-in-laws, nieces and nephews.
Born in Honesdale on January 22, 1931, she was the daughter of the late John and Gertrude Schmidt. She graduated from Honesdale Catholic High School and Wayne Commercial School and soon married and helped build their home outside Beach Lake; she was a loving and caring mom and housewife. As her children grew older, she was employed by the U. S. Postal Service in Honesdale, and occasionally served as substitute Post Master at the White Mills office. She was an active member of St. Bernard’s Church in Beach Lake. While a life-long resident of Wayne County, Betty moved to North Wales in 2001 to be near family.
A Mass of Christian Burial will be held at St. Bernard’s Church, Beach Lake on Weds 16 June at 10:00 AM with internment at St. Mary Magdalen Cemetery, Honesdale directly following. Arrangements by Hessling Funeral Home, Inc., 428 Main St. Honesdale. In lieu of flowers, memorial contributions can be made to American Heart Associate or American Cancer Society.