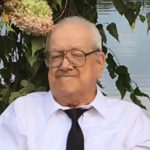 Edward Milton Roberts, 83, of Cherry Ridge, died on Thursday, October 28, 2021 at Wayne Memorial Hospital. He was preceded in death by his wife, the former Mary Louise Bossick who died on January 22, 2007.

Born on August 10, 1938 in Honesdale, he was the son of the late Charles and Viola (Dillmuth) Roberts. Ed began working at a young age at the Worth Bat Company in White Mills and was employed there until they closed. During that time he became a skilled woodworker. He later worked in screen printing before retiring.

Surviving are his daughters, Louise Bronson and husband Christopher and Delores Carney and husband William all of Cherry Ridge; his brothers William Roberts and wife Nancy and Terry Roberts all of Honesdale; a sister Katie Wittig of South Canaan. Also surviving are his grandchildren, Daniel Kelch, Faith Miletta and husband Brandon, Shawn Bronson, Kyle and Jessica Carney; several nieces and nephews.

A blessing service will be held on Wednesday, November 3rd at Hessling Funeral Home, Inc., 428 Main St. Honesdale at 7 pm. Friends may visit on Wednesday, 4 until the time of service.