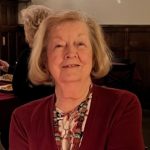 Dr. Kathryn L. Vennie, 83, of Hawley, died on Monday, August 29, 2022, at Regional Hospital of Scranton surrounded by her family.

Born on February 28, 1939, in Pelham, NY, she was the daughter of the late Joseph and Eleanor (Lynn) Quinnan.  She graduated from Pelham Memorial High School, class of 1956, and received a Bachelor of Science degree from Marywood University.  She continued her studies and received her Master of Science Degree from Marywood in 1971. She became a Licensed Clinical Psychologist. Having a desire to continuously learn, in 2016 she earned her Doctorate from Arizona State University in Behavioral Health and was a member of The Honor Society of Phi Kappa Phi, ASU Chapter.

In her early career Kathryn taught school at Delaware Valley School District and then the newly formed Wallenpaupack Area School District.  In 1981, Kathryn began her own psychology practice caring for many over the years. Her primary office was in the Lake Wallenpaupack area, with additional offices in Clarks Summit and Stroudsburg throughout her career. Dr. Vennie continued seeing patients right up to her passing. She was a member and Past President of the Pennsylvania Psychological Association, the American Psychological Association, and several other organizations.

When she was not working, Kathryn enjoyed reading, sewing, and baking.  She enjoyed spending time on and around Lake Wallenpaupack.  She especially cherished time spent with her grandchildren and family.

She was a member of Queen of Peace Parish attending St. Veronica’s Church in Greentown.

She was preceded in death by her son, Scott Vennie and her brother, John Quinnan.

Private funeral services were held at the convenience of the family.  Arrangements by Hessling Murray Funeral Home, 428 Main St. Honesdale.

Memorial contributions can be made to Memorial Sloan Kettering Cancer Center, www.mskcc.org.