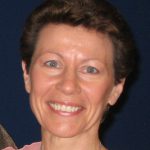 Debra M. Schuman ,60, of Honesdale passed away at home on February 4th, 2020 after a long courageous battle with cancer. She was born Debra Reed on March 28, 1959 in Honesdale and was a graduate of Honesdale High School, class of 1977. She was preceded in death by her parents Sanford and Helen Reed, both of Honesdale.
Debbie is survived by her husband John of Honesdale. They celebrated their 38th wedding anniversary on September 19. Debbie is also survived by her children Chad and his wife Suzanne, and Kyle and his wife Stephanie. Debbie also had 5 grandchildren; Nathan 10, Dominic 9, Lucas 6, Hailey 4, and Brayden 2.
Debbie was a devoted grandmother. Known as Nina, she lived for her grandbabies. Her favorite thing in the world was spending time with her family especially for Sunday evening suppers. She loved to watch her boys wrestle, her “Chicklet” dance, and her “Little Bear” get into mischief. Debbie also loved to dance, spent countless hours reading, and one of her favorite places on earth was watching the sunrise on the beach with her dog Tango.
Debbie was employed by Wayne Memorial Hospital for over 42 years. She worked in the Dietary Department and Medical Records. Even after her cancer diagnosis, Deb willed herself to be productive and get to work every day. Debbie was also a hospice volunteer and volunteered with the Pike County Humane Society. She was an inspiration to every life she touched
Debbie’s family will hold a private celebration of her life. In lieu of flowers, donations in Debra’s name may be made to the Dessin Animal Shelter or St. Jude’s Children’s Hospital.