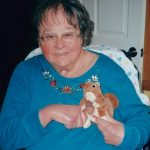 Barbara Ann Houghtaling, 71, of Honesdale, died on Thursday, August 29, 2019 at Lehigh Valley Hospital-Cedar Crest in Allentown. She was preceded in death by her first husband Michael Lorenzen and second husband Ivan Houghtaling.

For over thirty years, Barbara owned and operated Rileyville Day Care. She was well known in the area as the “Book Lady,” ordering and sorting books that were delivered to the Wayne Highlands Elementary Schools twice a year to very appreciative children.

Barbara worked tirelessly for the disabled by encouraging all businesses in Wayne County to comply with ADA Requirements. She also served on the state council in Harrisburg to enforce ADA rules.

She was preceded in death by her son Edward S. Lorenzen; her grandson Michael Lorenzen; step-daughters Amy Adams and Debbie Robbins.

A Mass of Christian Burial will be celebrated on Wednesday, Sept. 4th at St. Joseph’s Church in Rileyville at 10 am. All attending are asked to meet at the church. Interment will follow in St. Joseph’s Cemetery. Friends may visit Hessling Funeral Home, Inc., 428 Main St. Honesdale, PA on Tuesday, 4 to 7.

Memorial contributions can be made to St. Joseph’s Church, 414 Church St. Honesdale, PA 18431.