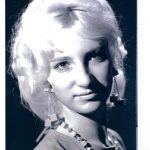 Born on April 11, 1949 in Kassel, Germany, she was the daughter of Walter Bellof and Hildegard Geb Gondlach Bellof. Yvonne was a seamstress in Germany and later worked at D & S Knitting in White Mills.

An talented knitter, she made clothes for Cabbage Patch Dolls and draperies and enjoyed selling her creations at flea markets. At home she enjoyed gardening and her flowers. Yvonne was a member of St. John the Evangelist Parish in Honesdale attending St. Bernard’s Church in Beach Lake.

She was preceded in death by her sister Renate Bornmann.

A Mass of Christian Burial will be celebrated on Saturday, December 1st at St. Mary Magdalen Church in Honesdale at 10 am. Interment will follow in St. Mary’s Cemetery. Friends may visit Hessling Funeral Home, Inc., 428 Main St. Honesdale on Friday, 4 to 7.