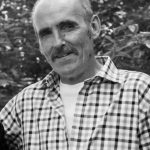 On Friday, August 28, 2020, William (Bill) Dougher Jr., loving husband and father of two children passed away at the age of 61 surrounded by his family.

Bill was born on January 12, 1959 in Honesdale to Ann and William Dougher Sr.  He graduated from Wallenpaupack High School in 1976 and worked for Worth Bat in White Mills with his father for many years.  On September 25, 1982 he married his high school sweetheart, Susan (Gager) Dougher and they purchased a house in White Mills raising two children, Robert A. Dougher and Harmony (Dougher) Merves.

Bill worked for Dorsan, an excavating company in Honesdale, which steered him in the direction of being a heavy equipment operator.  With a passion for dirt and a skill unmatched, there wasn’t a piece of equipment he could not run, nor project too big to tackle.  Working for Bunnell Waste Removal until his passing, he was in some type of machine every day.  That was his calling.

Spending time with his wife and watching Nascar with his dog Dozer were his two favorite past times.  In 2019, he was given a beautiful granddaughter, Livia Rose, who was the sunshine of his life.  He would wait to Facetime every night just to see her smiling face.

Bill was preceded in death by his father Bill, his mother Ann, and sister Patti.  He is survived by his wife Sue, his son Bobby, and his daughter Harmony and her husband Zachary and granddaughter Livia.  He also has two surviving sisters, Linda Gager and husband Lucky and Donna Tyler and husband Jeff.  Also surviving are many close family members, including nieces, nephews, and cousins.

Due to current health restrictions, a memorial service will be held at a later date.  Arrangements by Hessling Funeral Home, Inc., 428 Main St. Honesdale.

In lieu of flowers, memorial contributions can be made to the Dessin Animal Shelter, 138 Miller Dr. Honesdale, PA 18431.