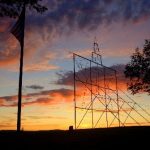 Walter Mahon passed away peacefully on Tuesday, June 1, 2021. He was 95. Walter was born to the late William and Mary (Nelson) Mahon. He was raised in Haskell, NJ and attended Butler High School. He served in the US Army Air Core from 1944 to 1946 as an Athletic Instructor. In 1949 he married Wilma Cooper and moved to Riverdale, NJ where they raised their three sons, Walter R. Mahon, Robert E. Mahon and Gary A. Mahon. Walter worked as a Supervising Engineer at Curtis Wright. He retired in 1985 and they moved to Honesdale, PA. He enjoyed woodworking and making bird houses to benefit St.Jude Children’s Hospital. He was predeceased by his brother William Mahon and sister Audrey (Mahon) Domanski. Walter is survived by his son, Gary Mahon and his wife Nancy Sommerville-Mahon, Robert Mahon and his partner Debra White and Walter Mahon and his wife Deborah. He was also survived by grandchildren and great-grandchildren. A memorial service will be held June 19th at Hessling Funeral Home, Inc., 428 Main St. Honesdale, PA 18431 at 11 am. The family will receive friends, 10 to service time.