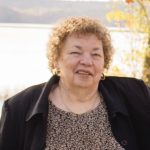 Thomasina Randazzo nee DiBenedetto passed on Thursday, October 29th 2020 at the age of eighty-one at Wayne Woodlands Manor in Waymart, PA. Born March 18th, 1939 in Ozone Park, NY to Marco DiBenedetto and Bertha DiBenedetto (Milano). She was married to the late Joseph Junior Randazzo who predeceased her in 2005. Thomasina is survived by her daughters, Debbie Randazzo of Long Island, NY, Donnamarie Gregory and husband David of Beach Lake, PA and son in law Vincent Fava, Jr. of Carrolton, TX. Four grandchildren: Melissa Fava Garcia and husband Joseph and Dana Fava all of Carrollton, TX, Ashleigh Smith and husband Zachary of Honesdale, PA, and Austin Gillet of Tulsa, OK. Six great grandchildren: Melita and Vincent Garcia, Charlotte Fava-Sands, Asher and Bentley Gillet, and Clara Smith. Two step granddaughters: Katie and Cree Gregory. Also surviving are her sister and brother-in-law Marie and William Ficht of Scottsburg, IN, sisters-in-law Maryjane and Maria DiBenedetto. Brother-in-law and sister-in-law Michael and Arlene Randazzo as well as numerous nieces and nephews. Also, not to be forgotten, longtime family friend and Godfather to her daughter, Patrick Anselmo.

Mrs. Randazzo, lovingly called Tommie, was retired from Ozone Industries, a helicopter and aeronautics parts company in Queens, NY. She and her husband Joe moved to North Babylon, LI, NY in the summer of 1984, then later retired to Hawley, PA. Due to rough winters they moved to a small community near Hilton Head, SC in 2002. After her husband passed in 2005, Tommie moved back to Pennsylvania to reside with her daughter, Donna and her family. She also resided for a year with her daughter, Debbie, in Baldwin, NY only to return to her beloved Pennsylvania where she spent the remainder of her days.

Tommie found her greatest joy in life being a wife, mother, grandmother and great grandmother. She also greatly enjoyed the holidays and cooking for her family. It brought her so much happiness to share her love of old world Italian food with those she loved.

A Memorial Mass will be celebrated on Wednesday, November 4th at St. Mary Magdalen Church in Honesdale at 10 am. Interment will follow in Hillcrest Cemetery, Galilee. Arrangements by Hessling Funeral Home, Inc., 428 Main St. Honesdale.