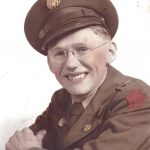 Born on September 3, 1932 in Jefferson Township, Lackawanna County, PA, Tom was the son of the late Willis and Louise Lovelace Hiller. He was a graduate on White Mills School.

Tom enlisted in the Pennsylvania National Guard in 1950 where he served with the 109th Infantry. While heading to Indiana for training before being deployed overseas, the train was hit from behind causing tragic deaths of fellow Pennsylvania Servicemen. Upon completion of his training, he was stationed in Germany.

Once discharged from the service, he left the beautiful northeast and moved to Paterson, NJ for a time where he began his 42 year career as an aerospace engineer. He was an integral part of the development of the guidance systems that led to a man walking on the moon. While living in Paterson, he cast his eyes on a blonde haired beauty, Betty, whom he doted on for 56 years until she was called to our Lord on July 17, 2012.

Tom gave his time freely to his family, friends and community. He was a lifelong member with the White Mills Volunteer Fire Department where he served as a board member and sat on many committees. He was also a driver with the White Mills Ambulance. He was truly with his brothers when he was at the fire hall raising money for the department at the chicken BBQ, bingo, or many of the other functions. He especially enjoyed playing hozzie on Sunday nights with the “All Timers Gang.”

Tom was at home in nature and especially enjoyed fishing trips to Canada. He loved to hunt and fish and shared his love of these sports with his nephew Mike, children and grandchildren. He was a founding member of the White Mills Hunting Club Association.

As per his request, cremation was held and funeral services for his family will be held on Monday, November 19th at the White Mills United Methodist Church by Pastor Marge Allgeier at 11 am. All friends are encouraged to attend a celebration of his life at the White Mills Fire Hall on Monday, noon until 3. Private interment will be in Indian Orchard Cemetery at the convenience of his family. Arrangements by Hessling Funeral Home, Inc., 428 Main St. Honesdale.

In lieu of flowers, memorial contributions can be made to the White Mills Fire Department, PO Box 273, White Mills, PA 18473.