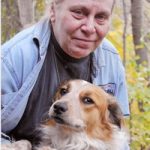 The only child of the late Francis and Ruth Fiore, she was born on November 20, 1948 and grew up in New Jersey.  After a successful career as an event organizer, she retired, left the hectic corporate life, bought land in Preston Township, and built a house in 2003.  She traded in her cherry red sports car, business attire, and high heels for “a truck, a shot gun, and a big dog,”

Her culinary prowess came to light as she shared her love of cooking, Italian food, and great sauces and gravies with her new neighbors and friends.  However, her mechanical skills are summed up by her famous quote, ”The only thing I can do with a screwdriver is drink it.”

Missing interconnecting, she gravitated to the Kitchen Center in Honesdale, working there and eventually buying the business from the Antonelli family.

Terrie and her official greeter, Keeper, became mainstays in the Honesdale community, continuing to provide top end kitchen supplies, knives, and culinary expertise.  She expanded the offerings, adding a “Manly Room” for supplies for all the hunting and fishing enthusiasts.  Terrie was also active in the Greater Honesdale Partnership and contributed to many local causes.

When the Kitchen Center closed in 2017, Terrie’s energies turned to adopting and providing for rescued dogs, the bigger the better.  At one time, getting into the house to visit cost you eight dog cookies, one each, and two for Zeus.

She is predeceased by her fiancé, Jack Kustaborder April, 7, 2019, and her furry kids, Sampson, Dakota, Harley, Ziggy, Tank, and Keeper.  Zeus and Ruthie survive and are now in new homes.

Thanks are in order for the many caregivers who provided for Terrie’s needs in her declining health over the last years.

Because of them, she was able to live out her life with her dogs at her estate, known as “Wit’s End,” until the last days.

Per her wishes, no services are planned.   Her cremains will be scattered at Wit’s End along with Jack and “the kids” at a future date.

To honor Terrie’s love of animals, memorial contributions can be made to the Dessin Animal Shelter, or the Ruth Fiore Fund, managed by the Wayne County Community Foundation, that helps fund needs of working SAR and police K-9s.