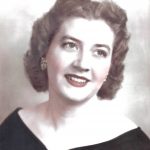 Teresa L. Farrell, 89 of Honesdale, died on Wednesday, August 14, 2019 at Wayne Woodlands Manor. She was a resident of Washington, DC and suburban Maryland during her working career in the Department of Defense, Department of the Navy, and later in the National Endowment of the Arts, until she retired from government service.

Born on January 15, 1930, on the Farrell family farm in Egypt, PA, she was the youngest of nine children of Frank and Anna (McGraw) Farrell. She moved to Honesdale with her parents when the family sold the farm, and graduated from Honesdale Catholic High School.

Teresa initially worked in Scranton, and then Harrisburg, before moving to the Washington, DC area, where she lived until returning to Honesdale in 2014. She had many friends and associates in both DC and Honesdale areas. She, like her brothers and sisters, maintained her devout religious faith throughout her years. Teresa was fun loving and independent. She always enjoyed visiting, socializing, parties, and was well known for having a great sense of humor, and telling stories about her early life on the farm with her brothers and sisters. She also followed news of the defense industry with great interest in her retirement years, where she had seen so many advancements made during her working career.

She was preceded in death by her brothers: Francis, John, and Paul; and her sisters Beatrice, Julia Leonard, Ann Lynch, Elizabeth O’Hara, and Mary O’Hara. She is survived by many nieces, nephews, and cousins from the Honesdale area.

A Mass of Christian Burial will be celebrated on Monday, August 19th at St. Mary Magdalen Church, Honesdale at 10 am. Interment will follow in St. John’s Cemetery. Friends may visit Hessling Funeral Home, Inc., 428 Main St. Honesdale on Sunday, 2 to 5.

Donations may be made in her name to the Poor Clares, Washington, DC.

Teresa’s relatives would also life to thank the staff of Wayne Woodlands Manor for their very professional care of her over the last several years.