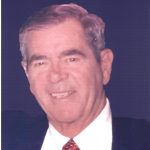 Born on January 5, 1938 in Waymart, he was the son of the late Rudolph and Cecelia (Lubinski) Dieterich. He graduated from Waymart High School and served four years in the US Navy. During his time in the Navy, Rudy served on a destroyer and before being honorably discharged was stationed at the Pentagon in Washington D.C..

He later met and married his wife and they moved to New Jersey. He worked for Allstate Insurance in Somerville/Raritan until his retirement in 1999. Following his retirement, he and his wife spent their time between Marco Island, FL and Lake Wallenpaupack, spending the last three years solely at the lake.

Rudy will be remembered as a good man who gained the respect of others by being honest and treating them with respect.

He was preceded in death by his sister Joan (White) Warncke; his brothers-in-law Ronald Gumpper and Robert Romich; great granddaughter Kyla Schwesinger and his former daughter-in-law Karen Dieterich.

A Funeral Mass will be celebrated on Friday, December 3rd at Queen of Peace Church, Hawley at 10 am. Interment with military honors will follow in St. Mary’s Cemetery, Honesdale. Arrangements by Hessling Funeral Home, Inc., 428 Main St. Honesdale.