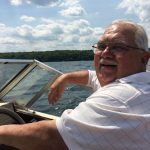 Ronald H. Burke, 79, of Beach Lake, PA (formerly of Palmyra, PA), passed suddenly on October 16, 2018, of natural causes. He left this Earth peacefully after a rich, full life, in spite of numerous tales of near-death experiences he’d shared with his grandchildren over the years, including an ill-fated fishing trip on the unseaworthy “Chick Magnet” caught adrift in a thunderstorm.

Born in Greensburg, PA, on July 16, 1939, to the late Hugh P. and Edith Condo Burke, and raised in Jeannette, PA, Ron was a Jayhawk graduate, class of 1957. He is survived by his ever-patient wife of 58 years, Helen Dlusky Burke, high school sweetheart and love of his life. Ron went first because everyone, including him, knew he’d be lost without her and likely would’ve died from a broken heart… if starvation didn’t hit first.

Ron’s love of eating a good meal was perhaps only eclipsed by his abundant love for those with whom he shared the table. His children, grandchildren, and great-grandchild were his pride and joy, but his burgundy Cadillac, fitted with a personalized “RB PAR” license plate, was a close runner-up.

Ron fancied few material things (the Cadillac, a notable exception) and appreciated the simple pleasures in life, such as working hard and relaxing with family and friends.

Since his fledgling career as a Doo-wop singer in the ‘50s didn’t pan out, Ron was a longtime employee at J.C. Penney Company and later the Milton Hershey School. In work and life, he was able to befriend strangers and could talk to anyone who’d listen. He was once “let go” from a part-time retirement job as a greeter for being too gregarious with visitors.

He will be missed dearly, but his memory and laughter will live on through his three children and their spouses, Carey & Kent Erdman of Hillsborough, NJ; Ronald Jr. & Marina Burke of Poquoson, VA; and Christy & Richard Frey of Beach Lake, PA; his grandchildren, Sarah & Craig Swaisgood of Houston, TX; William Erdman of Somerville, NJ; Rebecca Erdman of New York, NY; Timothy Erdman of Hillsborough, NJ; Alexa Burke of Poquoson, VA; Abigail Frey of Beach Lake, PA; and Anthony & Courtney Burke and great-granddaughter, Winnie, of Fredericksburg, VA.

A celebration of his life will be held on Saturday, November 10, at Ascension Church in Jeannette, PA. The service will begin at 1:30 p.m.