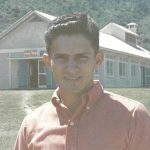 Born in the Bronx, NY on April 29, 1946, he was the son of the late John Salvato and Florence (Pabon) Salvato Braun. Bob was a graduate of Smithtown Central High School, class of 1964. He was a US Air Force veteran of the Vietnam War. Following his honorable discharge, Bob continued his education at Queensborough Community College and in 1976 graduated from Hunter College with a degree in Physical Education.

For many years, Bob taught Physical Education in the New York City area and coached wrestling and track.

Bob enjoyed old movie films such as Captain Marvel and Spy Smasher and old television shows life Superman and The Lone Ranger. He and his wife enjoyed taking in animals who needed a home and to be cared for. Most of all, Bob loved spending time with his granddaughter. He was a member of St. John the Evangelist Parish in Honesdale.

Surviving are his sons, Adam J. Salvato of Honesdale and Justin Salvato and wife Lisa of Matamoras, PA; his granddaughter, Charlotte.

A memorial service will be held at a later date. Arrangements by Hessling Funeral Home, Inc., 428 Main St. Honesdale, PA.