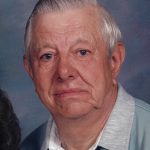 Quinten C. Holl, 91 of Honesdale, died on Friday, July 26, 2019 at Wayne Memorial Hospital. He is survived by his wife of 67 years, the former Lucille Magalski. The couple married on September 1, 1951.

Born on October 2, 1927 in Honesdale, he was the son of the late Jacob and Kathryn (Rose) Holl. The “Mayor of Erie Street” lived on the same street his entire life. It was common to drive by his house and see he and his friends socializing in his front yard and keeping an eye on the neighborhood.

For 45 years, Quinten was employed at S.J. Bailey and Sons in Honesdale before retiring.

He was a life member of Hose Co. #1 in Honesdale and the Cherry Ridge Fishing Club. He was also a member of St. John the Evangelist Parish in Honesdale.

He was preceded in death by his brother Kenneth Holl.

Funeral services will be held on Tuesday, July 30th at Hessling Funeral Home, Inc., 428 Main St. Honesdale at 11 am. Interment will follow in St. Mary’s Cemetery, Honesdale. Friends may visit on Monday, 4 to 7.

Memorial contributions can be made to St. Joseph’s Center, 2010 Adams Ave. Scranton, PA 18509 or online www.stjosephscenter.org or to the donors favorite charity.