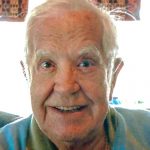 Philip J. Cordaro, owner of Cordaro’s Restaurant, passed away peacefully on Wednesday, September 5, 2018 to be with our Lord and Savior. He is survived by his wife of 64 years, Charlmaine (Reid) Cordaro of Honesdale.

Born on August 27, 1929 in Dunmore, PA, he was the son of the late Giuseppe and Rosina (Crucilla) Cordaro. He was a United States Army veteran serving from 1946 to 1948. In 1954 he relocated to Honesdale from Dunmore and opened the restaurant and started a coffee truck route. He and his wife owned and operated Cordaro’s Restaurant for more than 64 years. He touched many people on his journey through life, helping where he could.

He was passionate and very active in the Honesdale Booster Club, the Stinger football program, a Lion Club member and served on the WIDCO board. He loved to play golf and had played on his own bowling team. He sponsored Phil’s Diner Little League team for many years. He established and operated the very first concession stand on-site of the Honesdale High School football field and for many years, served breakfast for the Honesdale Football teams on game day.

Philip was preceded in death by his son Michael in 1958, his grandson Justin in 2013; brothers Joseph and Samuel, and sisters Grace Gaetano, Mary Giambre and Josephine Cerato.

Memorial contributions can be made to Wayne Memorial Home Health and Hospice, 601 Park St. Honesdale, PA 18431.