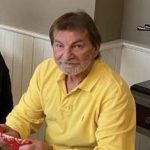 Norman was born in Brooklyn, NY to Raymond and Lucretia (Bortree) Driscoll on November 24, 1952. He was the 2nd born of 5 children and is now survived by his sister Ann Driscoll and brother Ric Madden.

A few years later the family moved to Wayne County, the birthplace of their mother. After graduating from high school, Norman joined the United States Coast Guard. He was active from August 1972 to August 1976. Once discharged from the USCG he attended the University of Alabama to pursue a degree in Engineering.

Norman had a love for books, especially science fiction. He also enjoyed playing the guitar and collecting knives.

He is survived by his daughters Shannon Driscoll Pate, Jordan Driscoll DiTommaso (Zach) and 3 grandchildren, Avery, Lilly and Landon.  He is preceded in death by his parents, Raymond and Lucretia Driscoll, brother Robert Driscoll and sister Mary Mowatt.

At Norman’s request his body was donated for the advancement of science and education.  Local arrangements by Hessling Funeral Home, Inc., 428 Main St. Honesdale.

A small private gathering by the family will take place at a later date and time.