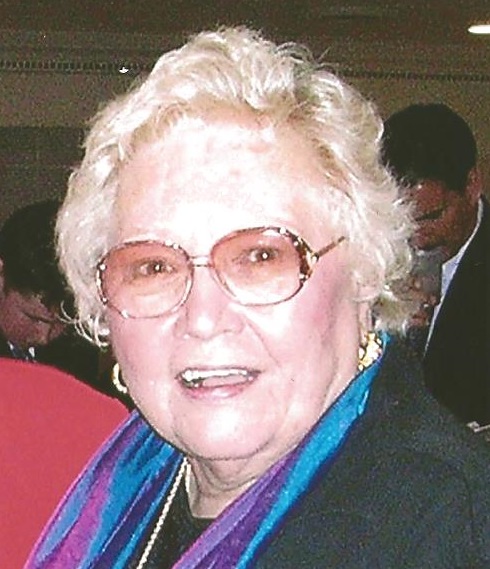 Mary Elizabeth “Betty” deMaye Bratnyk was born on December 8, 1925 and died peacefully in the arms of her family on April 13, 2018. She was born in Washington, DC and lived in Brooklyn, New York and Port Orange, Florida before calling Honesdale, Pennsylvania her home. Betty attended Immaculate Conception High School in Washington, DC. During World War II, she was active in the USO and Red Cross and was cited by President Harry S. Truman for her very active volunteerism. Her life in Brooklyn included the Legion of Mary, Cub Scout Den Mother, Saint Brendan’s Rosary Society and the “Old Bags Club.” After her career as a stay-at-home mother, raising three children, she became a Medical Secretary. In Port Orange, Florida she was a Eucharistic Minister and she was instrumental in introducing the Divine Mercy Devotion in Florida and Third OrderCarmelite. During her retirement years, she traveled extensively with her husband and her dogs. The last 20 years found her in Honesdale where she was a member of the Wayne County Business and ProfessionalWomen. She was preceded in death by her husbands John E. deMaye and George Bratnyk, her brother Edward Thompson and his wife Catherine and her sister Virginia Jelinek. She is survived by her daughter Betty deMaye-Caruth and her husband Dr.Lawrence Caruth, daughter Barbara deMaye, son John deMaye and her stepdaughter Susan Bratnyk as well as her grandsons and their spouses Edward and Carly, Michael and Amanda, step-grandchildren Edward Caruth and his partner Lee Ann Gallagher and Amy (Caruth) Korenyi-Both and her fiancé, Paris Hill as well as nine loving great grandchildren.
A Mass of Christian Burial will be celebrated on Tuesday, April 17th at St. Mary Magdalen Church, Honesdale at 10 am. Friends may visit Hessling Funeral Home, Inc. 428 Main Street, Honesdale on Monday from 4 pm to 7pm. The family would like to thank her daily long term caregivers, the many nurses and volunteers of Traditional Home Health and Hospice who tenderly cared for their mother, grandmother and great grandmother.
In lieu of flowers the family requests donations to Dessin Animal Shelter or Traditional Home Health and Hospice in Betty’s name.