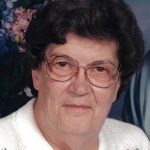 Born on April 14, 1929 in Canaan Township, she was the daughter of the late Edward Sr. and Mary (Oberly) Magalski. She was raised on the family farm in Prompton until she married her husband, She was a graduate of Honesdale High School, class of 1947.

Over the years, Lucille worked at several local businesses as a bookkeeper. She retired from Suburban Propane.

She was a member of St. John the Evangelist Parish and its Altar and Rosary Society. She grew up attending St. Mary’s Church in Waymart. She was a 4-H leader for the Busy Young Homemakers. She also volunteered with the former Honesdale Volunteer Ambulance. Lucille was proud to make a difference in others lives by donating blood.

She was preceded in death by her brothers Edward Jr. and James Magalski.

Memorial contributions can be made to the Wayne Woodlands Manor Activity Fund, 37 Woodlands Dr. Waymart, PA 18472.