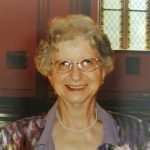 Born on December 18, 1929 in Honesdale, she was the daughter of the late Tracy and Eleanor (Rickert) Bishop. She worked briefly for Katz Factory. After the birth of her twin sons, she became a homemaker. Later she was a bookkeeper for Mullen Brothers .

She enjoyed her family and gardening.

She was preceded in death by her sister Reba Dein and her in-laws, Clarence and Anna Mullen.

A private funeral service will be held at the convenience of her family. Arrangements by Hessling Funeral Home, Inc., 428 Main St. Honesdale.