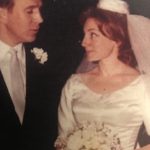 Having received a monetary gift upon graduation, her lifelong dream of travelling to Europe to see the art and architecture she had studied came true. She travelled in Europe, staying with friends of the family, and made great new friends in France, Italy and Greece.

Returning to the States, not wanting to paint alone at home, she channeled her artistic skill into the fashion industry as a textile pattern designer.

With her glamorous mane of red hair hair and her artistic nature, June was passionate about building her career in the 1960s when women were beginning to enter the work force in significant numbers.

She started out working for mentors, Jose Martin and Eric Sorter, the latter of Soptra Fabrics.

She loved the job and was very good at it, moving effortlessly from company to company for better opportunities. She was talented, so she was a sought-after designer.

She would go on to work for many different companies over the years, including Texfi, Hampton, and DeMarco, among others. At one point, she created her own label, Fleurs. She won at least two Tommy Awards, the New York City Garment Center’s awards.

In the 1960s and ’70s, she would travel to the fashion shows in France, Italy, Germany & England. She would study the European designs for her own inspiration to design for the American market. Her patterns appeared on fabrics for garments for Victoria’s Secret, Vanity Fair, Sears and many others.

June loved her work, which combined her creative ability with business hustle and bustle. She enjoyed the many colorful characters in the Garment District-and she was one of them, too.

If she could have, she would have worked forever. She reluctantly retired at nearly 79, due to a failing knee. She retired to the beautiful green mountain state of Vermont (Rutland) with her husband, Bill.

She met her husband, William Anderson, at a party. William had come to New York (from Nebraska) to attend New York University Law School. June and Bill fell in love that night at the party. June said she fell in love with Bill because she could talk easily with him and he listened to her.

It was an intermarriage-between June, who was Jewish, and Bill, who was Lutheran,-which wasn’t that common in those days. June and Bill were spiritual and humanitarian in nature. They were united by their passion for the civil rights movement.

June and Bill shared a passion for life and a good sense of humor, as well as an interest in current events, art, music, fine dining and love of classic movies.

She said she never wanted to get old, but once she did, she said she wanted to keep living…because she was enjoying it.
She lived a full life.
She will be greatly missed.