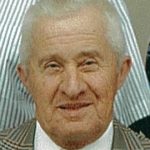 Born at the family home in Canaan Township on December 24, 1930, he was the son of the late John S. Galllik, Sr., and Sophie Kresock Gallik. After serving in the US Army during the Korean Conflict, John was employed by S.J. Bailey and Sons until his retirement. He was a loving husband, father and grandfather.

He was also preceded in death by his son-in-law Lawrence Medeiros, brothers Thomas and Frank, and sisters Veronica Dahlhaus, Marge Sanchez and Martha Finn.

In lieu of flowers, donations may be made in memory of John Gallik to Hospice of the Sacred Heart, 600 Baltimore Drive, Wilkes-Barre, PA 18702.