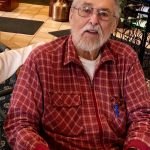 John J. McKenna of Beach Lake, PA passed away after 91 years of a life well lived.  First born son of Francis & Helen McKenna, he grew up in Butler, NJ, was an altar boy at St. Anthony’s Roman Catholic Church and graduate of St. Anthony Elementary school. He went on to graduate from Butler High School. While attending there he met and later married his wife, Marion, who predeceased him in 2002.

John & Marion raised their family in Newfoundland, NJ.  He worked as a machinist and supervisor at Henry Spen & Company. Retiring to Beach Lake, PA he pursued his love of gardening, fishing, hunting and enjoying time with his family.