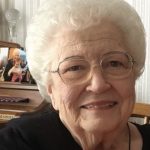 She was born on August 18, 1933 in Honesdale, PA at the original Wayne Memorial Hospital to the late Frank and Violet (Cosgrove) Nonnenmacher.  Joan was an only child and grew up on Elizabeth Street in White Mills and later moved to Hawley after her marriage to Edmund C. Beilman who passed away in 2001 after 49 years of marriage.

A graduate of Hawley High School in 1952, Joan put her business skills to work at PP&L where she was employed as a secretary until beginning her family.  A loving and dedicated mother, she raised five children and eventually went back to work as a bookkeeper with the First National Bank in Hawley.  In later years, she also was a bookkeeper for LaTournous Produce Company in Hawley.

Joan was a member of Queen of Peace Church and their Altar and Rosary Society. She was an avid reader and found it difficult to put down any book.  Going out to lunch with friends was also one of her favorite past times.

Joan was a devoted wife, mother, grandmother, and great-grandmother.  She was the matriarch of the family in the truest sense of the word.  Family was everything to her and became her proudest accomplishment.  She had a keen recall of family history and loved to tell stories of her ancestors to all who would listen.

Joan is also survived by numerous relatives along with many cherished friends.

In lieu of flowers, please consider a donation to the American Cancer Society at PO Box 22718, Oklahoma City, OK 73123 and indicate its use for Bladder Cancer Research or the Hawley Public Library at 103 Main Avenue, Hawley, PA 18428.