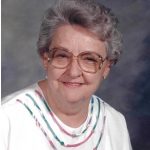 She was a graduate of the Hawley High School and of Wyoming Seminary Dean School of Business, Kingston, and was employed for a time in the Wayne County Mutual Fire Insurance Co., Honesdale.

She held BS and MA degrees in Speech Communications from Syracuse University, NY.  While pursuing her MA, she was granted a graduate teaching assistantship at the University and taught courses in Public Speaking and in Voice and Diction.  In addition, she completed courses in Speech Pathology and Audiology, and was awarded a certificate for Tutorial Audiology Study in Great Britain, Sweden and France, from the Ewing Speech and Hearing Clinic, Ithaca College, NY.  Part of the study included attendance at the International Congress for the Deaf in Stockholm, Sweden.

During the Vietnam Conflict, she was employed by USAID, the US Agency for International Development, Washington, D.C., as an Education Advisor in the Teaching of English as a Second Language.  Although her main duties and responsibilities were in Saigon, her job description also included special assignments wherein she flew to the Provinces and met with school personnel, conducted workshops, administered examinations, and interviewed and selected in-service teachers for AID grants that would enable them to pursue advanced degree programs in US institutions.  The Wayne County Historical Society will soon be publishing a collection of letters Jane wrote home, during her time in Vietnam.

A member of Grace Episcopal Church, Jane served though the years as a Lector, a licensed Lay Reader, Chalice Bearer, and Lay Eucharistic Minister.  She was also a member of the choir, the Vestry, and the Episcopal Women’s Organization where she liked to write and present oral readings.

In celebration of the 150th Anniversary of Grace Church, she researched, wrote, and had published a 115 page illustrated history of the parish, beginning with the founding of the church in 1832 and continuing with the history until June, 1982.  She also wrote a brief 100 year history of Christ Episcopal Church, Indian Orchard, 1908-2008.

Jane enjoyed traveling and was especially grateful to have had the opportunity to travel in Asia and the Middle East, as well as Europe.  She enjoyed reading, the theater and music.  In high school, she was noted for her singing at school assemblies, concerts and weddings.

She is survived by several nephews, nieces and cousins.  Three brothers, Harold, Robert and Stephen, preceded her in death.

There are no public calling hours.  Private services will be held at the convenience of her family.   Interment is in the Lakeville Cemetery, Lakeville.  Arrangements are made by the Hessling Funeral Home, Inc., 428 Main Street, Honesdale.