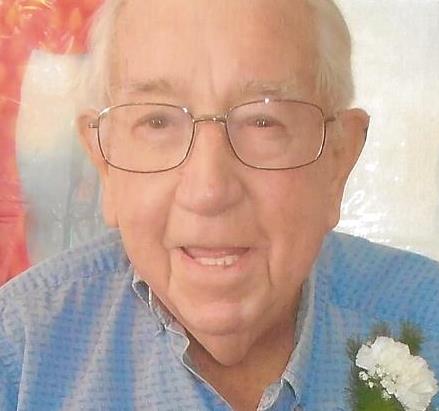 James Elias Sherry, 91, formerly of Tunkhannock, died on Sunday, February
21, 2016 at Bethany Village where he was residing. He was preceded in
death by his wife, the former June Emma Dotter on September 10, 1997. The
couple married on January 27, 1950.

Born on December 8, 1924 in Kingston, PA, he was the son of the late Thomas
and Anna Daniels Sherry. He was a graduate of Meyers High School, class of
1942. In July of 1942, he enlisted in the US Navy serving throughout World
War II in the North Atlantic, Mediterranean and Pacific Oceans. During
that time he served as a fireman and machinist on the destroyer, the USS
Nicholson.

Following his honorable discharge in November of 1945, Kings College where
he played on the baseball team. Later he received master degrees from
Alfred University and CW Post University. He began his career in
education, teaching history in the Arkport School District in upstate New
York. He and his wife along with their three children moved to Long
Island where be became a well respected educator. He began teaching
history and english at Massapequa High School and settled at Berner High
School where he became very involved with school activities. He chaired
the social studies department and was a class advisor. He also coached the
varsity baseball team and JV basketball teams. In addition to his
teaching career, Jim was a part-time librarian at Farmingdale University
and Brooklyn Poly-Tech. After 37 years in education, he retired in 1982.

In his younger years, Jim enjoyed playing basketball in YMCA leagues. An
avid baseball fan, he enjoyed cheering for the New York Yankees. Jim also
enjoyed playing golf with his good friends where he would often reminisce
of having lot of fun together talking about politics. In recent years, he
became a self exclaimed “political junkie.” He enjoyed staying up to date
with current events and politics.

Jim was a loving grandfather and always looked forward to visits from his
special grandson Riley.

He was preceded in death by his brother Donald Sherry.

A memorial service will be held on Friday, March 4th at Hessling Funeral
Home, Inc., 428 Main St Honesdale at 11am. The family will receive friends
10 to service time.

Memorial contributions can be made to the Wayne County Library, Hospice of
the Sacred Heart or St. Joseph’s Trinity Medical Daycare.