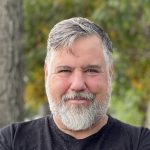 James “Big Jim” Cilento, a warrior to the end, passed away peacefully at home on Tuesday, June 21st with the love of his life, Julie Osborne by his side.

Jim was born February 13, 1960,to Ralph and Florence (Cebulski) Cilento in Brooklyn (Gerritsen Beach), NY. He is preceded in death by his father, Ralph.

In early adulthood, Jim worked building and repairing wooden water towers in NYC for the Carpenters Union. His former employer was featured on “Dirty Jobs”, and he relished sharing that episode with friends and family. He always pointed out former coworkers, recounted stories from being on the job, and reflected on his time spent there.

Later in life, Jim settled in Northeastern Pennsylvania where he has lived for the past few decades. Here, he focused on his passion for racing-you could often find Jim in the garage tinkering away on his Nova, doing burnouts in a parking lot, or racing at the racetrack. Jim was a proud father to his three children, and he instilled his love of ice hockey in each of them, resulting in them all rooting for different teams. Rivalry ensued whenever your team was playing against Big Jim’s and watching a game at home was never complete without some lighthearted trash talking about the opposing team.

Jim will be remembered for his devotion to his family, love of good food, optimism, perseverance, and sense of humor. He will always be greatly missed by all who knew and loved him.

A mass of Christian Burial will be celebrated on June 28, 2022 at 10:00 am at the Queen of Peace Church in Hawley, Pa.Cremation will follow. Internment will be private and there will be no viewing hours.

Donations can be made on his behalf to PanCan.org or to the American Cancer Society.