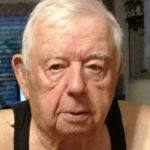 Til we meet again, Ivan Newport. Husband, father, grandfather, he remained the strongest and most loved leader of our family. Friday, August 14th he went to be with the lord after a strong fight with heart disease. Surviving is his wife of 41 years, Elizabeth “Betty” Horst Newport who was the love of his life. Jack of all trades, he made a beautiful life and home for him and Betty. Born in Brahman Pa on July 31, 1932 he was the son of the late Earnest and Agnes Kehrley Newport. Orphaned at an early age, Ivan lived many years with his Uncle Reuben who he idolized as a dad. He attended a one room schoolhouse where he had academic honors. He then quit school to join the Army where he served as Sergeant in the Korean War. Following the war, he worked for Stephens Brothers Dairy in Carbondale Pa until they closed the doors in 1979. His employment then was with Wayne County Ford and George W Kinsman in Honesdale, Pa. Ivan then “retired” and went to work for Roche Supply in Honesdale until his illness. He adored Billy and Geg Roche and considered them family. Ivan leaves behind his son, Larry Newport (Donna), Daughters Elaine Alnick (Vince), Denise Chase (Ted), Tonya Franklin (Kyle). Grandson Scott Pennay (Lisa), granddaughters Shannon Glosenger (Ron), Christina Johanson(Jim), Emi Decker(Ray), Kendra Franklin, and Kourtney Franklin, Krystal Chase and Billy Chase. Great grandchildren Grace and Emma Glosenger, Remington Pennay, and Cora Decker. Sister Lucille Yeager. Also surviving are sister-in-law, Sharon Allbee (John), Sue Lester, and Cindy VanBrunt, brother-in-law, William Horst (Marilyn). Nieces, Amanda Allbee, Lucinda Schaffer ( Brien), and Shannon O’Connor( Jeffrey). Nephews, David Allbee (Cassie), Jason Lester (Tracy), Nicholas Lester (Kathleen), Bryan Schaffer, Courtland VanBrunt  and Kenneth Horst (Holly), together with several great nieces and nephews. Besides his parents he was proceeded in death by brother Buddy, sisters Irma, Thelma, Evelyn; brother-in-law Wallace Ervin Horst. His family will miss his spunk, his wisdom, and the love he held deep in his heart for his family. Services were provided by Hessling Funeral Home, Inc. with interment at Smith Hill United Methodist Church Cemetery. Donations can be made to Wayne Memorial Hospice.