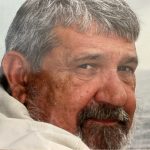 It is with broken hearts that we announce the passing on Friday, June 24, of our wonderful husband, dad, grandfather, brother, uncle, cousin and best friend, Harry Patten. He was 72.

Harry is survived by his loving wife and best friend for 38 years, Debbie (Freund) Patten. They truly lived a wonderful love story.

In addition to his wife, also surviving are daughter, Denise and husband, Jack Ward, of Dickson City, and their three sons and daughter; as well as son, Douglas Smith and wife, Christine (Jautz), of Lake Ariel, and their three sons; nine grandchildren; two sisters, JoAnn Shaffer and Tina Patten, and their families; numerous aunts, uncles, nieces, nephews, cousins; and those that meant so much to him, his wonderful friends who he cherished immensely.

In his younger years Harry enjoyed the camaraderie of friends on bowling teams, pool and dart leagues, and a good game of Hozze. He loved ice fishing and hunting with members of the Eight Point Hunting Club, as well as the many woodworking projects he completed. And we can’t forget his love for westerns. Even the ones he watched more than 10 times.

Harry was preceded in death by his parents, in-laws; and two brothers, Ricky and Ernie; brother-in-law, Bob Shaffer; and cousin, Alveena Bagdonas.

Growing up in Pleasant Mount and spending summers at his Grandpa Rude’s farm. Harry learned from a very early age that hard work truly is rewarding. There wasn’t a job or task that he wouldn’t put his whole heart into. Retiring after 30 years as a flooring installer for Pratts Decorators Showcase. Harry approached every job as a challenge and was rewarded at the end of the day with satisfaction of a job well done.

What meant the most to Harry was spending time with his wife and best friend, Debbie. They were inseparable.

He loved his family and friends and would drop what he was doing to lend a hand, never asking for anything in return. If he didn’t tease you, he didn’t like you. He was the best husband, father, Pop-Pop, father-in-law, brother and friend.

A special thank you to the doctors and nurses at Geisinger CMC, and the wonderful and comforting staff at Hospice of the Sacred Heart. You are all truly angels.

Having our own special Angel to watch over us will be our comfort.  Rest well my love.