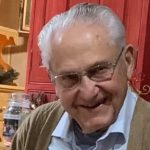 Born September 20, 1926 at the family home in Lookout, he was the son of the late Gerald and Lottie (Diehl) Hawley. He was a US Navy veteran who served in the Pacific Theater during World War II.

Harold began his career working for Welsh Farms where he would eventually become Vice President in Long Valley, NJ. He later worked for Tofutti Brands in Crandord, NJ where he retired.

He enjoyed being outdoors, hunting, fishing and gardening. He was lovingly referred to by his grandchildren as P-Pa.

He was preceded in death by his brothers, Clayton and Lowell Hawley; his sisters, Marion Daub, Gladys McCormick and Eleanor Keesler.

A private graveside service will be held at the convenience of his family. Arrangements by Hessling Murray Funeral Home, 428 Main St. Honesdale.

Memorial contributions can be made to the Equinunk Fire Dept., P.O. Box 67 Equinunk PA 18417.