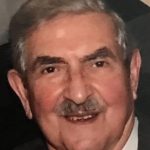 Gus Peter Leunes, 92, of Honesdale died Tuesday August 20, 2019 after a brief illness at Wayne Memorial Hospital. He was preceded in death by his wife of 50 years, Joyce E. Miller Leunes on August 26, 2006.

Born August 11, 1927 in Honesdale Pa, he was the son of the late Peter and Pauline Leunes and the last surviving member of his family. Gus was the owner and operator of Leunes Bar in Honesdale for over 60 years.

He was a veteran of the United States Army serving during the Korean Conflict.

Gus was an icon in Honesdale. He will be extremely missed by his family and friends. He had a quick wit and genuine smile that everyone who knew him will always remember. Whether you were part of his morning coffee Klatch (who solved the worlds problems), regular crew or someone who he just met, he always made you feel like a longstanding friend. Few people have had the opportunity to make such a lasting impression. We have lost a wonderful soul.

He is survived by his son, Mark Leunes and wife Michelle, his daughter Sherrie Richner, two grandchildren, Michael and Marisa, two great grandchildren, Matthew and Mia and many nieces and nephews.

He was preceded in death by a brother George Leunes and four sisters, Stella Miszler, Bette Maltese, Helen Ryan and Mary Hopkins and a son-in-law, John Richner.

Funeral services will be held on Friday, August 23, 2019 at the Grace Episcopal Church, Honesdale at 10 am. Interment will follow in Bethany Cemetery. Friends may visit on Thursday, August 22nd, at Hessling Funeral Home, Inc. from 4 to 7.