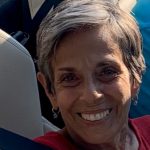 Georgianne Perrotti, 68, of Honesdale, died on Friday, September 10, 2021 at Allied Services Hospice in Scranton after a courageous 3 year battle with cancer. She is survived by her husband, Michael J. Perrotti. The couple would have celebrated their 51st wedding anniversary October 31st.

Born on March 24, 1953 in Newark, NJ, she was the daughter of the late Olimpio and Maria (Labato) Rebello. After marrying her high school sweetheart, Michael, they began raising their family and later settled in Wayne County. She enjoyed crafting and was a member of St. John the Evangelist Parish in Honesdale. She loved spending time with her grandchildren and watching them grow.

Georgianne was an angel in every sense of the word.

In addition to Michael, she is survived by her children, Maria Perrotti and significant other, Kip Odell of Honesdale; Michael Perrotti Jr. and wife Paula of New Brunswick, NJ and Nicole Maglione and husband Dominic of Honesdale; her sister Angela Santos and husband Danny of Toms River, NJ; grandchildren Caroline and Samantha Linn, Dominic, Maria and Georgianna Maglione and Eric and Carter Odell; several nieces and nephews.

Following cremation, a Memorial Mass will be celebrated on Friday, September 17th at St. John the Evangelist Church in Honesdale at 10 am. Arrangements by Hessling Funeral Home, Inc., 428 Main St. Honesdale.

Memorial contributions can be made to St. Jude Children’s Hospital.