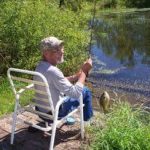 Frederick L Cipriano, 84 passed away at home on December 6, 2021 in Beach Lake, PA following a long and fulfilling life. He was the loving husband and widower of Elizabeth “Betty Boop” Cipriano (2018), this year they would have celebrated 50 years of love. Evidently heartbroken since her passing, the idea of reunion with his wife aids his many loving survivors with the peaceful acceptance of their loss.
“Freddie” was well known and immediately loved by all who were blessed enough to have known him. Many have expressed a sense of there “just being something about him.” He had the patience of a saint and was always willing to share a warm genuine smile. Born in Jamaica, Queens, NY on July 17, 1937, the oldest son of seven children born to Mary and Anthony (Larry) Cipriano he had a thorough understanding of hard work and sacrifice which greatly contributed to his radiating easy-going, forgiving, kindness and “concern-for-all-others” nature. Freddie retired from NY Department of Sanitation, a member of Morris Park Council Knights of Columbus, to Fawn Lake Forest and then Beach Lake, PA. The first two thirds of his life were fondly recalled as he shared stories of Aqueduct Racetrack, his memories of playing stoop ball and his adventures as the paperboy. His Queens NY upbringing was especially evident in his love for the City, his tales of recovering treasures on the job, and most notably without doubt him being the world’s greatest New York Mets fan no matter what their record was.
After relocating to Pennsylvania, he remained active in retirement being an involved community member of Fawn Lake Forest Association, Wayne County Men’s Pool League, and a favorite well-loved bartender at the White Owl from the early 90s into the 2000s. He enjoyed yardwork (even insisting upon mowing the lawn this past Summer), birdwatching, and woodworking. He was a very involved grandparent teaching and sharing his love of baseball, billiards, fishing and ATV/Kubota riding to his two generations of grandchildren. He was often in the stands of his grandchildren’s various sporting events over the years sharing the loudest support just by presence or a wink and a nod. He always had a pocket-full of hard candies to share and would happily eat all of the black jelly beans.
Surviving and missing him dearly locally are: his loving daughter Kathleen Borkowski and husband Robert “Bo.” Grandchildren Dana Gallik (affectionately referred to as Angel) and husband, Steve, Robert Borkowski Jr. (Moose). Great Grandchildren and the reason behind his biggest smiles – Kaylem Kresge (Big Boy) and Addison Gallik (Pretty Girl).
Also surviving in NY, NJ, FL, SC and NM are: his daughter, Jeanne Latham and husband Bill; sons : Freddie and wife Terri and Stephen; brothers: Anthony and wife Virginia; Robert and wife Pat; Sisters: (both affectionately claiming to be his favorite) Rosemary Carbonaro and Joanne Giacalone and husband Ron. Grandchildren: Nicole, Joanna, Siobhan, Rosemary and Mario; Great Grandchildren: Madison Isabella Carly and Noah and many loving Nieces and Nephews of two generations. Sister-in-Law: Genevieve Mountain and husband Eric, Bonus family members Ken Kresge, Mike McKenny and wife Lori, and Kimberly Tice. In addition to family, an endless list of friends and neighbors will also be missing him.
In addition to his wife, waiting to greet him at the gate in precedence are his parents, brothers: Vincent and Charles, brother-in-law Nicholas Carbonaro and several aunts and uncles.
In lieu of traditional immediate services, family will honor the wishes of the deceased to preserve dignity and following cremation will opt for a Celebration of Life with family and friends in his honor at a later date.
Arrangements by Hessling Funeral Home, Inc., 428 Main St. Honesdale.